I think I have a fairly diverse collection. I'm into vintage and modern. I have a couple player collections and a pretty solid team collection. I am not big into prospecting mainly because I'm really lazy about selling stuff so if I were to commit the capital I'm 100% sure I'd miss the window to sell. The few cards I have sold were mainly people reaching out to me cause they saw something they wanted and didn't want to trade. No big deal, there is a price for everything (you may not like it though because if its PC the price is going to be crazy). I view my collection as a loose investment. Some cards I know will never appreciate and I don't care one bit but some cards I've acquired through the years have gone up significantly in price. I'm priced out of my own cards in a way. It's weird to think to sell and then realize you won't ever be getting it back cause its way more then you'd want to spend, so I just keep it.

I went off on a bit of a tangent there but that's my 2 cents. Pun intended. I recently acquired this awesome card. It has literally been on ebay for 4 years at a price I was not willing to pay with no best offer. I've watched it go round and round my watch list too many times to count. I decided to send the seller a polite message and just ask if he had any wiggle room in price and if not no big deal. Pretty sure I wrote the message exactly like that. He didn't respond to the message but sent me a personal offer through ebay for 50% listed price. That was more in my range so I snagged it! Never hurts to ask. Worse he could've done is raised the price so no one would ever buy it or just say its staying there. 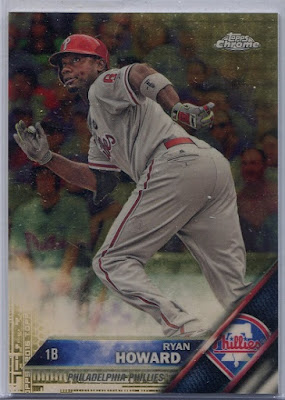 Excuse the dust, the card is super clean. This was his last Chrome card. I know he has a insert superfractor in this years Topps Series 2 that someone already pulled (also listed for a ridiculous 400 dollars). Will probably watch that one for a while if it keeps getting put up on ebay.

I now may go after this rainbow. I basically need all the numbered parallels except the purple. Long ways to go (damn reds out of 5)