Since I finally pulled the trigger on the 2016 Topps Chrome Superfractor I am going to make an attempt at the rainbow 4 years too late. I don't know if I'll ever find the reds out of 5. I need most of the numbered ones besides Purple. I have all the non numbered ones from previous pickups. I was able to knock a rarer one off the list. I'm not going to have the rest graded but either way it's a nice looking card. 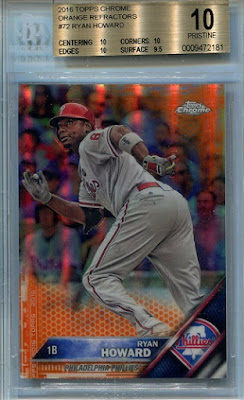 The orange out of 25! "Pristine" I bought it off of ebay from blowoutcards. I got them to come down a few bucks from the buy it now so I can't complain.

I've had a lot of competition for Howard cards lately on auctions. I know prices are trending up in general but it's not like he's super popular outside of Philly. Yesterday I put in a bid of 100 dollars for a Heritage auto from 2010. Nice card for sure but I would've thought that super high bid would've been enough and I get sniped by someone with a higher bid. Them's the breaks of course but I wonder who I'm bidding against. I typically don't see the cards re-surface so these are being paid for and put into some sort of collection I'd presume.

Would love to find another Ryan Howard PCer out there and compare collections. I'm sure I have stuff other people don't see much and I would love to see some hard to find cards.

Thanks for reading!
Posted by Brad's Blog at 1:11 PM