I recently completed my first trade with Sports Card Mask A Rade! I finished off his base set for 2013 Topps Chrome (FYI I have a ton of extra base please hit me up if you need some!)  He sent me a petty awesome package. I do enjoy the random surprise packages. I only agreed to some Frank Thomas's and some Eagles cards. My expectations were more then met.

I scanned 9 at a time but there are definitely a few gems I want to highlight! 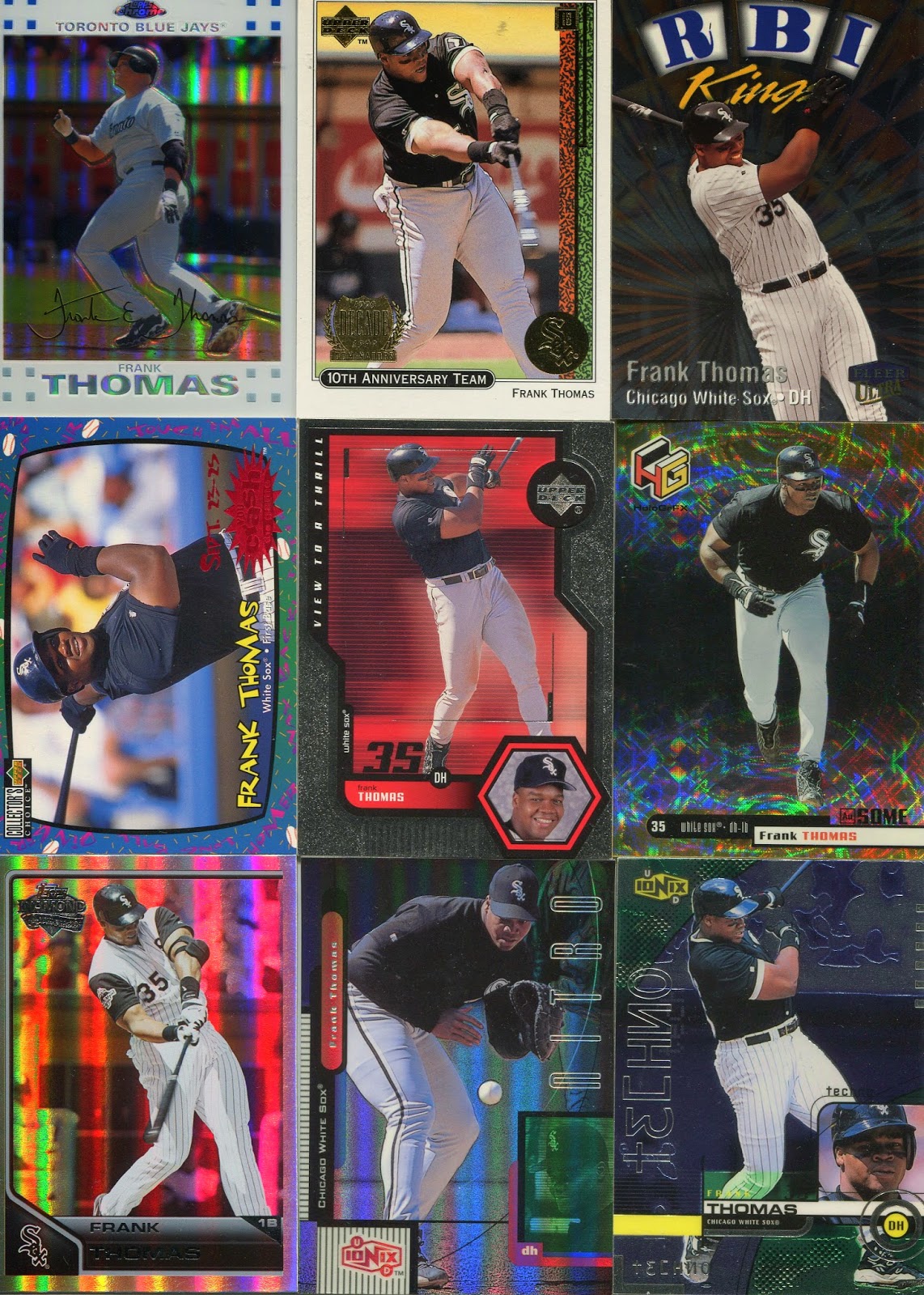 Received some new Frank Thomas cards! Always appreciated! The Topps Chrome is a refractor and numbered out of 650. The RBI Kings card is a pretty sweet 90s insert. One day I will own every card out there and this is a good start! 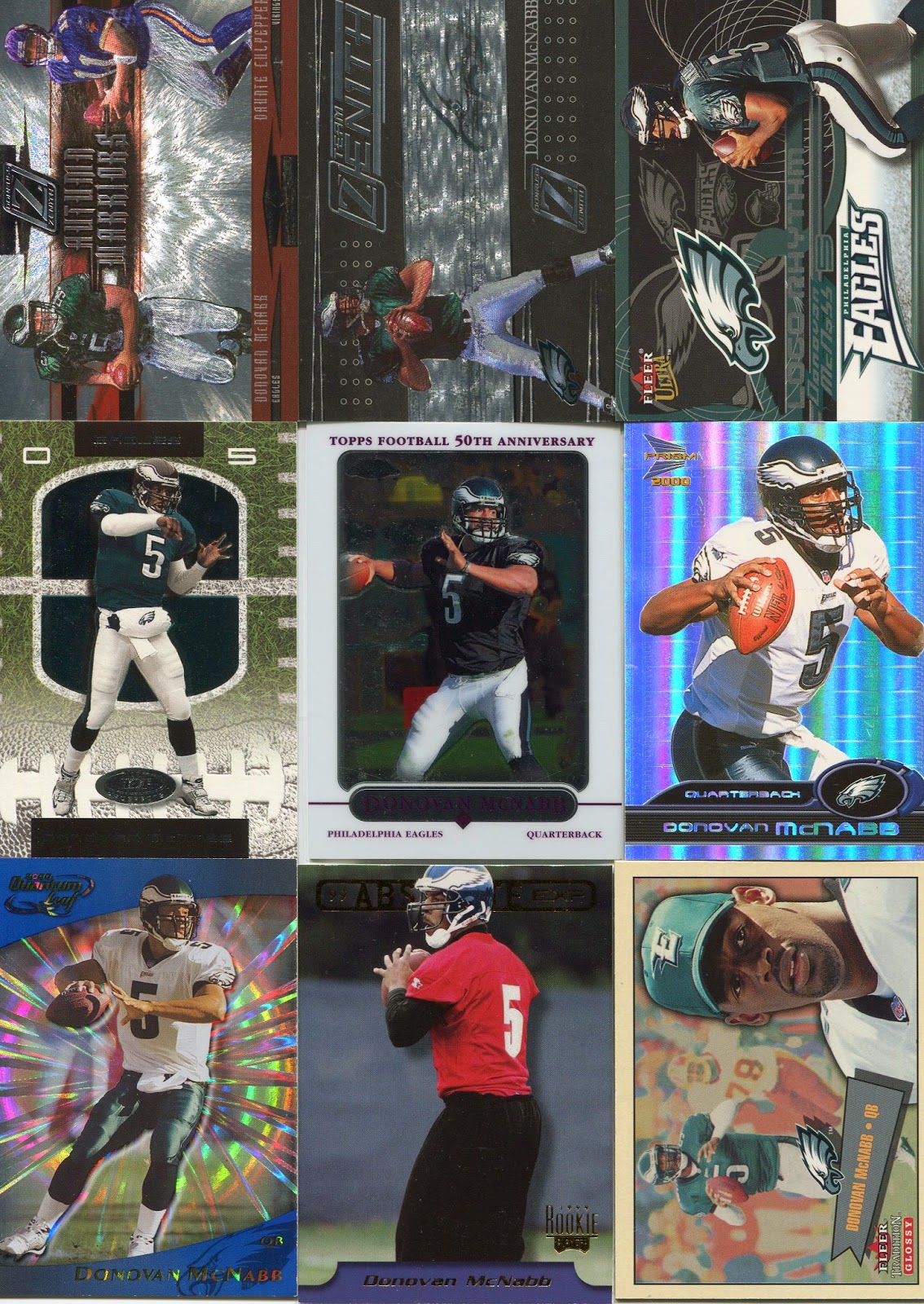 These are all Donovan McNabb! Despite his lack of ability to handle the media he was possibly the greatest Eagle QB of all time (we will see what Nick Foles can do). The top card with Daunte Culpepper is pretty cool. I was a big fan of his when he played with Randy Moss. One of my best fantasy teams all time featured Randy Moss, Daunte Culpepper and Torry Holt. 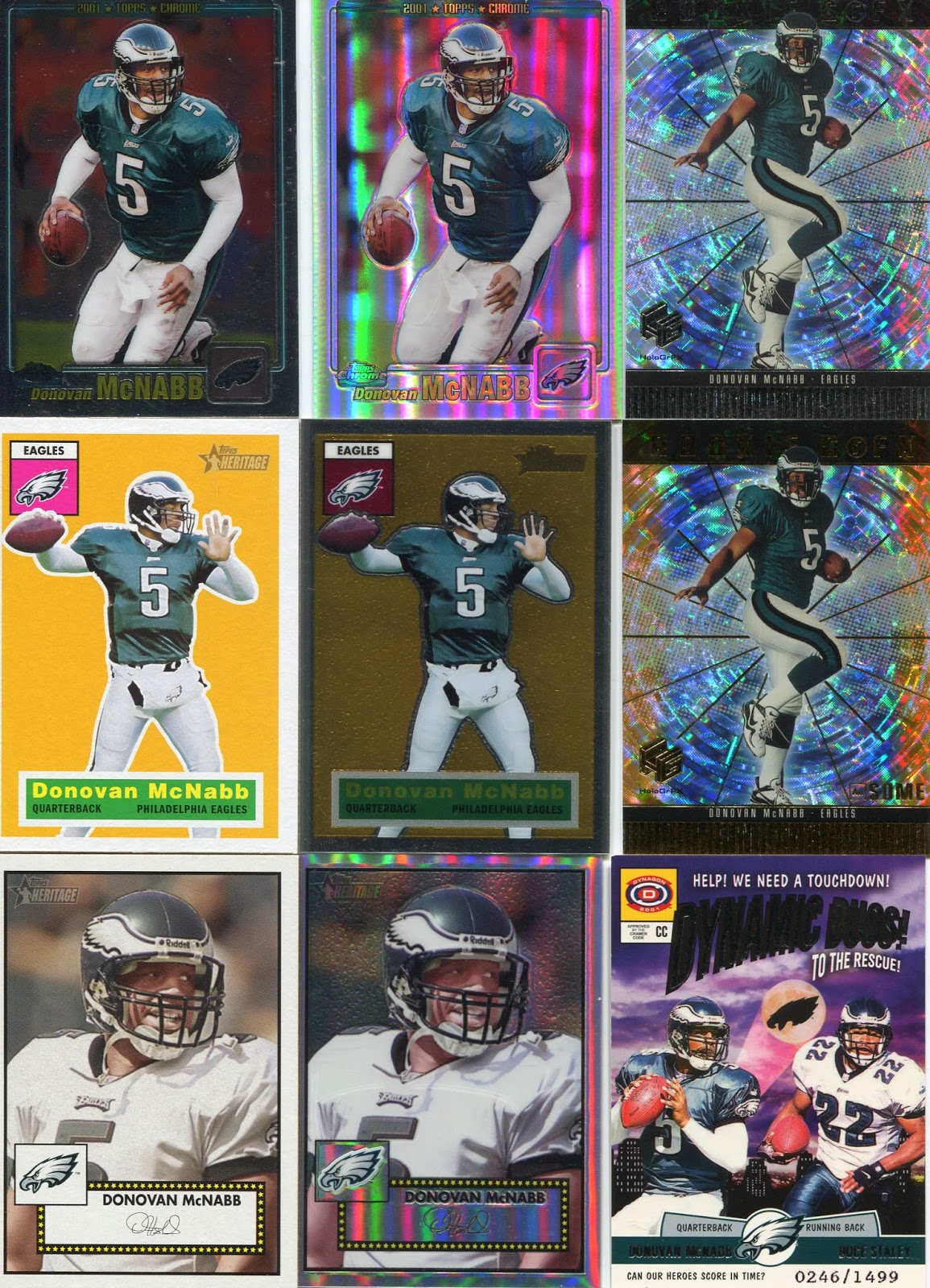 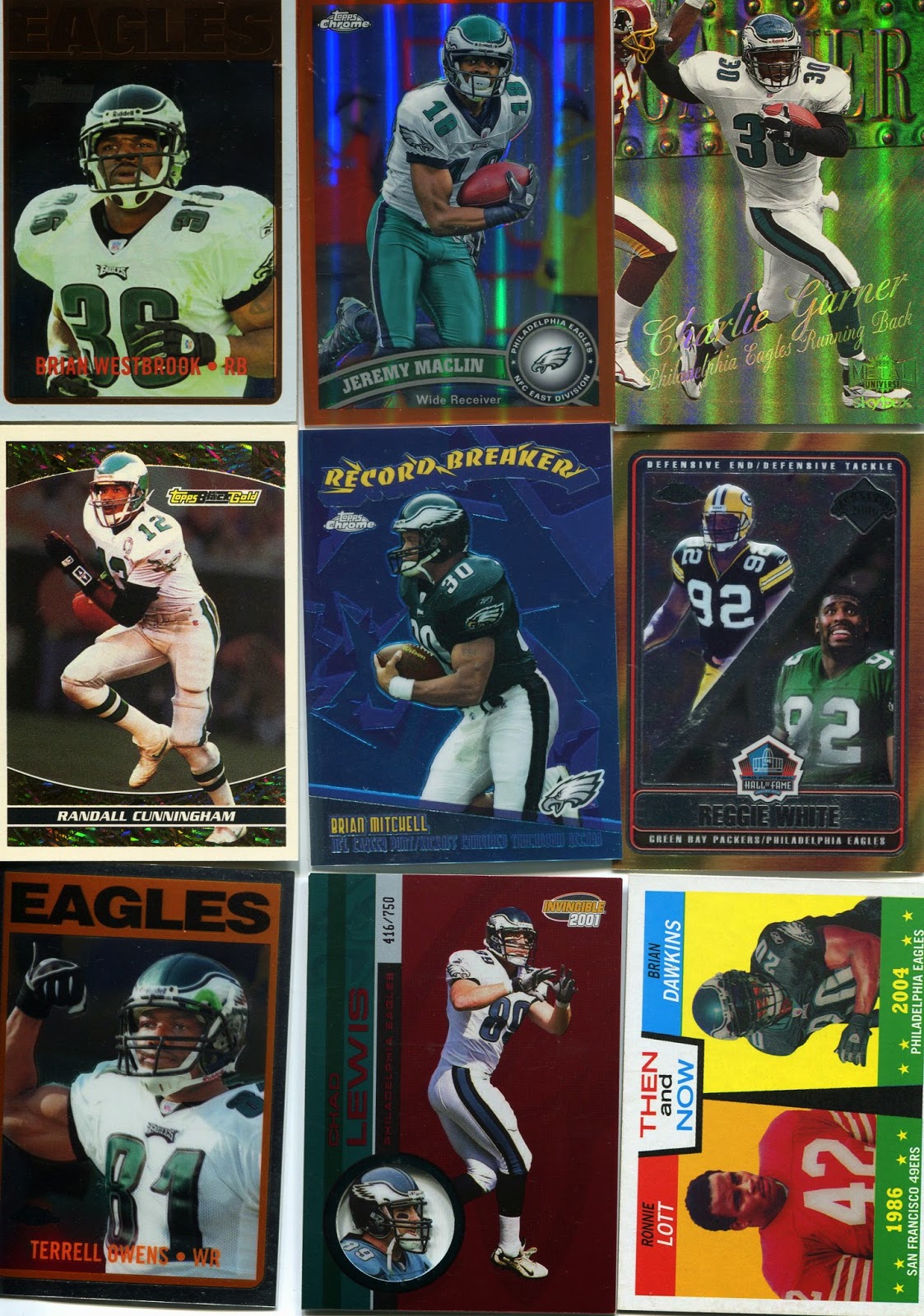 The card of the package to me is that Charlie Garner on the top right! It's a Precious Metal Gem numbered out of 50! Never thought I'd own one in any sport of the originals! Jeremy Maclin might become the man soon for the Eagles Wide Receivers. All these rumors flying around that D Jax is going to be traded. Which honestly I don't get. He creates space for the other receivers. I could care less if hes a loud mouth, if he can run and catch 80 for 1300 yards, I want him on the team. The Chad Lewis is cool. The little window with his helmet is see through! 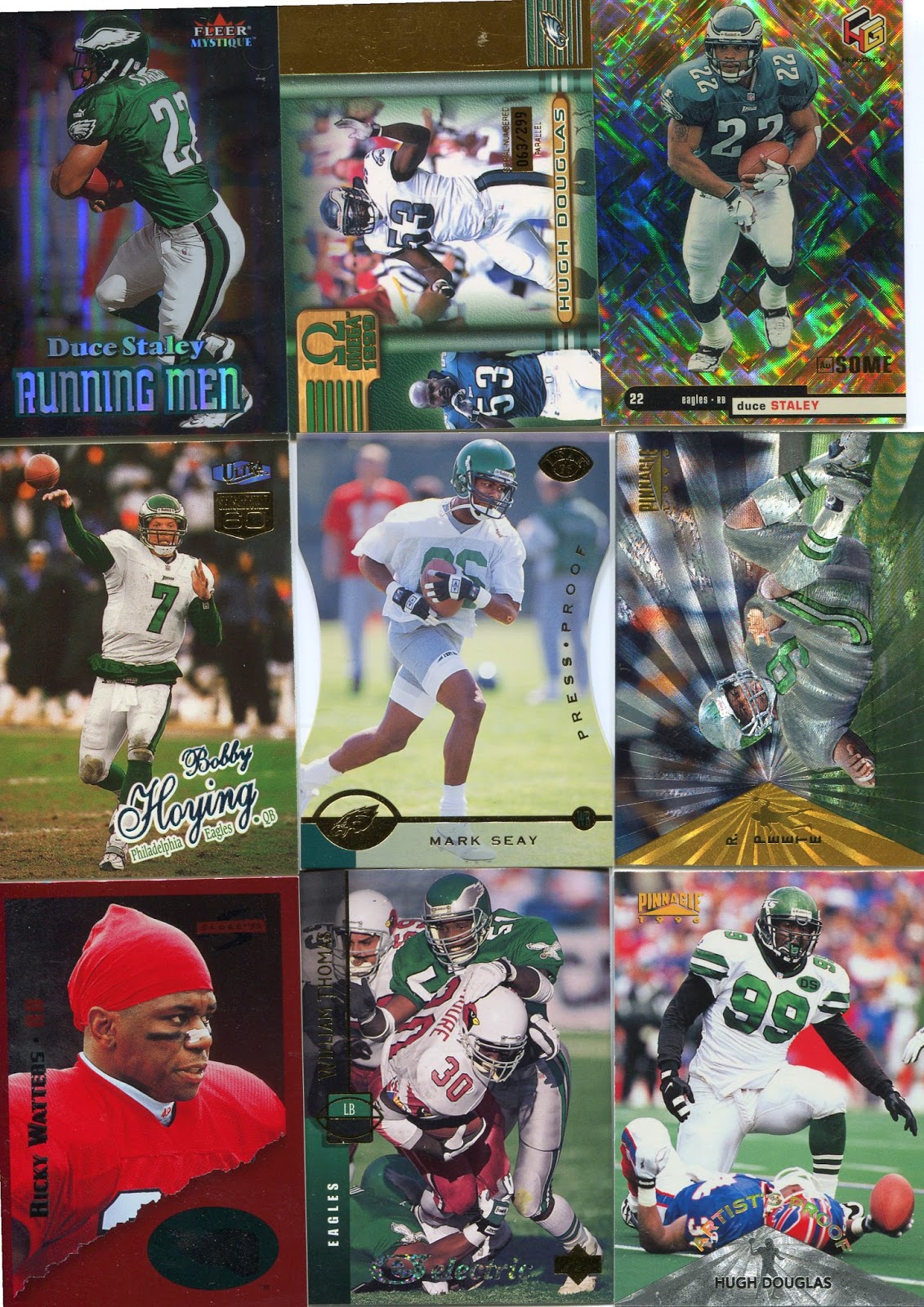 The Rodney Peete is a great 90s insert too, Dufex Technology is awesome! Love the Hugh Douglas picture. He flattened that Bills player! I went to one Eagles playoff game in my life at Veteran's Stadium. They were playing Tampa Bay and I remember when Hugh had a sack fumble against Shaun King. This game the Eagles won too (lets not talk about the other one).

Thanks for reading and thanks for the trade!
Posted by Brad's Blog at 7:17 AM