The Wife and I woke up at 5:15 AM on Friday to drive down to Washington DC for all the All Star Fanfest. We live a good 2 hours away but with Friday morning traffic we weren't sure how bad it would be if we waited too long to leave. The drive down actually was not bad at all we barely hit any traffic until getting into downtown DC. I was lucky to only drive around a little bit and found parking 2 blocks from the convention center for 20 dollars all day. I was expecting to spend a bit more for that. We got in line right away around 7:40 AM. There was only a few hundred people in front of us so not too bad. It was outside and you could see they had a ton of security checkpoints setup for entry. The night before we downloaded the QR codes on our phones so we could easily register for activities and pictures and things. I had a nice chat with the guy behind us in line. He is a Nationals season ticket holder but from near where I live. They started letting people in around 8:45 even though the show officially opened at 9. We had no issue getting in and followed the crowd the correct direction (the convention center is freaking huge). We were both able to get the mini Ryan Zimmerman bobbleheads being one of the first 3,000 people. That was cool.

As soon as we get on we made an immediate bee line to register our spot for Juan Marichal autograph. We got there fast so we waited maybe 10 minutes and were both able to reserve our spot. Some people complained that they could only reserve one spot at a time but this method was so much better then waiting in line for 3+ hours for one autograph. This way you can enjoy the exhibits and they text you when its time to get in line and your auto is guaranteed. They had overflow lines if you didn't register and the player still had time. We were able to get 2 really nice Marichal autos. He wasn't a particular fast signer but he took his time and made sure his signature looked good. Also the autos were authenticated with a MLB sticker holo on site. Very nice touch. 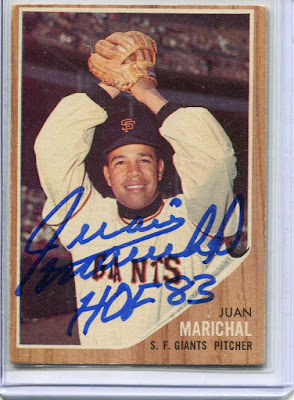 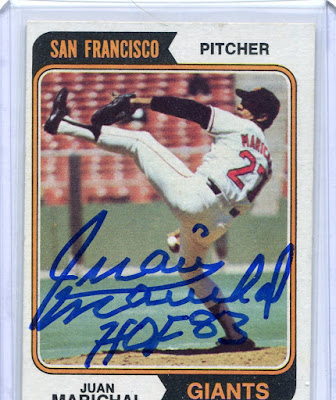 The top one is 1962 Topps and the 2nd is 1974 Topps. They both came out really nice especially the 74. Really like the picture and Mr. Marichal added his own inscription. Always appreciated. That was the one autograph I really wanted. I was super psyched to get it and not have to run to a line or anything like that.

The second thing I wanted was the Topps Giveaway all star stamped cards. I liked the design and gotta get them being a card collector since I'm there. Totally got gouged on the price of the packs (spent 42 dollars for 12 series 1 packs) but don't really have an option there. I should've bought some packs before the show and just kept them sealed. You have to open them in their presence to get the give-away cards. In the packs hit 1 nice card.. 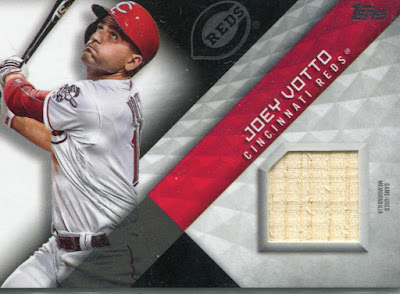 Pretty nice Joey Votto Relic. I do like the design in hand, they aren't drab.

Onto the set.. these look cool in hand too. 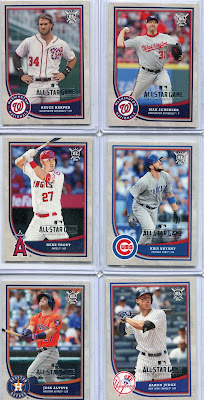 Harper, Scherzer, Trout, Bryant, Altuve and Judge. The who's who of baseball right now. I believe my all star set from Pheonix is in a binder right now. I'll have to combine these with them.

After this was completed we got some food from a stand inside the convention center. It was decent I had barbecue chicken with mac and cheese and the wife had Jerk chicken with rice.

Just to give an idea, the convention center was huge. It dwarfed the one in Pheonix a few years ago. They had tons of different stations and games and everyone in our experience was super friendly. 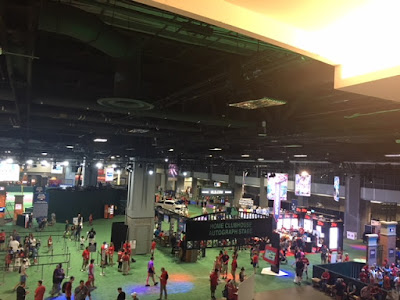 This is an overhead view of maybe a quarter of the place if that. We were able to pick up 3 new Beer Cozies for that collection (never pay for them but I always say yes if someone wants to give me one) My wife really wanted a picture with the big ball in front. There was a line there so after we ate we made our way over there. Turns out there was a line because Livan Hernandez was doing a free photo op! 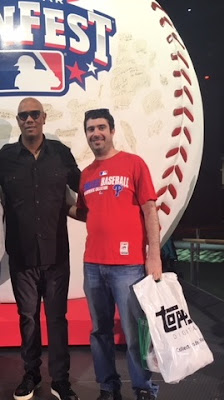 That's me in the flesh. He was nice shook my hand and took a good picture. After that we went to the other side of the ball and had a volunteer take our picture unobstructed.

Also, they had the actual World Series trophy there that will be given to the future winner this year. Pretty nice piece of jewelry (its made by Tiffany and Co.)

I had no interest in doing anything involving throwing because I already know I suck at that and didn't want to hurt my shoulder. There were 2 different live batting cages so we ended up doing both of those. For someone who hasn't swung a bat since the last FanFest in Pheonix I did pretty solid. A few swings and misses but more contact then not. Got a hold of a few and gave them good line drives. Was very pleased with myself. I could really swing those 31 ounce bats haha.

In between batting cages there was a Q&A with the All American Girls Baseball League (the real life Ladies that A League of Their Own was based off of). That was actually super interesting and it was fun to listen to them talk about their experiences and how it compares to today's game. Lots of personality there and anyone who enjoys the history of baseball I'd highly recommend talking and listening to them if you get the chance.

After that we were pretty beat since it was a long day starting at 5 AM or so. We decided to leave and drive down to Chantilly VA to check into the hotel for the night since we had a big card show day ahead of us the next day! No issues driving down there and hotel was good and normal. We ate dinner locally at a burger type restaurant/bar and went to bed at a normal time to get prepped for the next day! Stay tuned shortly for card show recap! Picked up a lot and had a great time overall!

Thanks for reading, anyone else make it to FanFest this weekend?
Posted by Brad's Blog at 2:34 PM