I wanted to make sure I got the Hoskins rookie purple from Toys R Us, since Toys R Us is no more. Not to happy in general about it being no more. Hedge funds suck at running businesses. I will never forgive Cerberus for destroying Chrysler but that's a story for another day.

Rhys has had quite a nice run after the All Star Break. Seven home runs in 8 games! He's batting like the way he should and can. I hope he emerges as the next big Phillies star along with Nola. It would be great if the Phillies made it to the playoffs and built up to a World Series in the next year or two. 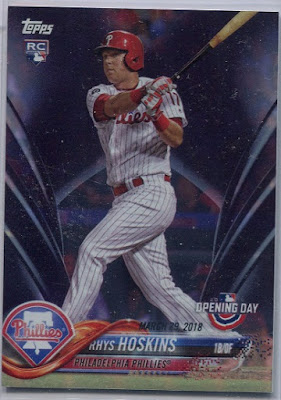 Pretty nice parallels in general. I wasn't able to find any packs before the whole bankruptcy thing so I had to buy it secondary. I still have quite a few purple parallels from 2013 Topps. That year the Wife and I hit up several Toys R Us's over a weekend and opened like 70 blister packs or so. It was fun. Sold a few but still have a ton of parallels left. (including 2 Trout's!) Last one sold for 50 bucks on ebay not bad!

Thanks for reading! Go Phillies!
Posted by Brad's Blog at 6:24 PM