This year is flying by! So much stuff happening! I'm not able to make it to the all star game this year but I am able to carve out a day to head down to fan fest! Pretty psyched about that. I went to the Phillies fan fest in the 90s but I was pretty young then. Remember waiting in lines and not a ton else. Also, went to the fan fest in Phoenix a few years ago (and every other all star event which was awesome!) and had a blast. I learned I can no longer throw a ball without throwing out my shoulder if I give max effort. May skip that throwing hard thing. On the flip side I learned I can still hit a pitching machine. Feels nice to actually make contact considering I gave up playing baseball in about 6th grade or so.

I have gotten a bunch of new cards this past few weeks just need to scan them. Always good stuff in my opinion.

Hope everyone has a nice 4th. Should be pretty low key for us. We were planning on going to a minor league game and see some fireworks but it was 90+ with 100% humidity so we skipped it. Thankfully good choice cause the thunderstorms started rolling in right around when the game was supposed to start. Also, we lost power until about 5 AM. Always fun to play some cards by candlelight.

All was not lost on the fireworks front though. I did go to the Phillies fireworks game on the 29th with my Mom and Wife. We try and go every year, always fun and the show is always good. That was the one game the Phillies lost to the Nationals 17-7. Never seen so many runs in person before. It was practically a home run derby. 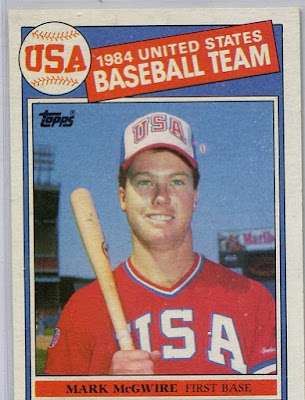 My Mark McGwire USA rookie card! Thankfully I did not buy this card at the peak of the home run craze. If I remember correctly it was going in the 500ish range? Could be wrong. I grabbed it for 10 dollars last year at a show. Figured that was a fair price for a card I had wanted.

Thanks for reading and enjoy the holiday and hopefully time off!
Posted by Brad's Blog at 6:42 AM