This is one of the nicer cards I have received this year. I am still actively chasing the 2014 Topps Chrome Ryan Howard Rainbow. As far as I know the superfractor has not surfaced (nor last year's for that matter). None of the printing plates either (although I consider that a bonus to the card rainbow). I am in need of the gold and red though if anyone has one!

I wasn't fully expecting to pick up this card when the first few that hit ebay were way more then I was willing to pay. I got lucky on a auction that ended at a weird time and was able to snag this card at a good price. 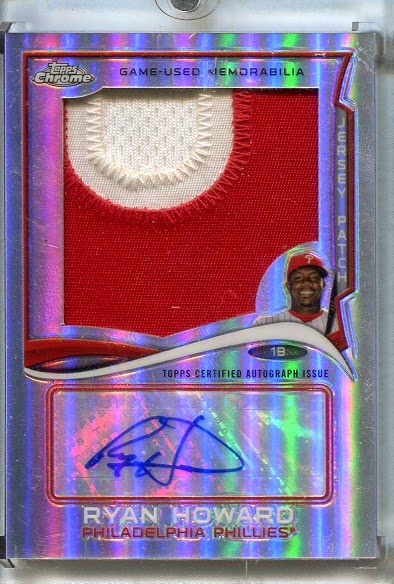 Awesome patch along with the auto! The card displays real nice and happy to add it to the ever growing Ryan Howard PC!

Topps got this card right!

Also, went to the Philly show today, had a blast. Picked up some cool things I hope to show this coming week. (mostly vintage!)

Thanks for reading!
Posted by Brad's Blog at 6:56 PM