A few weeks ago Dennis from Too Many Verlander's posted a whole lotta piles of cards and said if you want them claim your team. I naturally claimed the Phillies and I was not dissappointed one bit. To my surprise a few days later I had an 800 count box in my mailbox. It was holding about 700 cards. I still have quite a few Phillies to sort which is a good thing! I'm psyched to get to sorting by year and player or set (haven't really decided how I want to do it all yet).

I scanned a few of the ones that caught my eye: 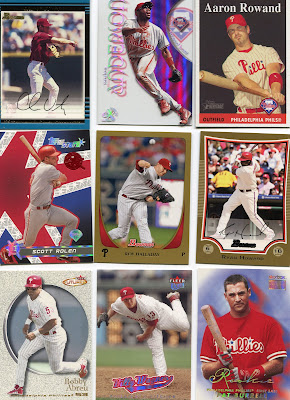 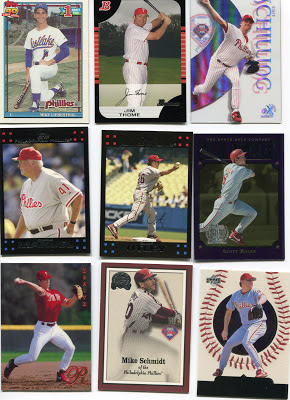 I love the mix from Lieberthal looking real young to Charlie doing his strut to the mound. I really hope the Phillies play well this year so Charlie gets to stick around. I don't agree with all of his moves but I think the players really like him and as long as hes there the Phillies are a desirable location to other players.

Thanks again Dennis for all the cards!
Posted by Brad's Blog at 6:28 PM