I recently joined a group over at Cardboard Conundrum. He's run 2 hockey breaks and so far I've enjoyed both and I've gotten a few nice things to add to my small hockey collection. This time he was opening boxes heavy on hits and low on basecards. He was kind of enough to offer anyone that joined if they did not get a hit he would put one in from his own collection. I of course picked the Flyers and got the Canadiens as my random team. 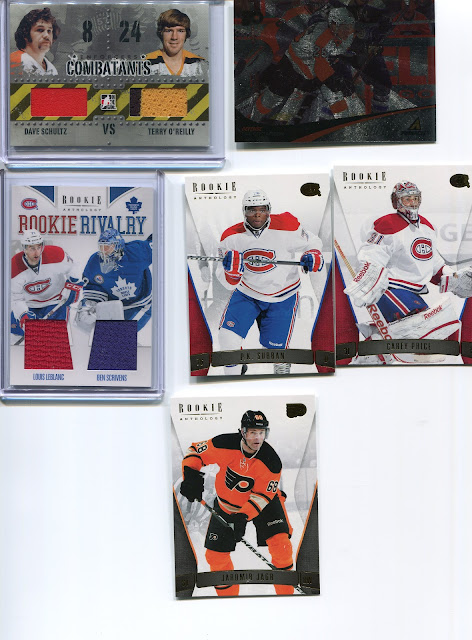 The Combatants card with Dave Schults and Terry O Reilly is really cool. It's from ITG Enforcers and I was happy when I saw a Flyer come out (and even happier when the randomizer chose my team!) The Rookie Rivalry card is pretty neat but I would trade it for a Flyers hit if anyone wanted it.  The real shiny card is a rookie card of Erik Gustafsson. He was pretty solid for the Flyers last year after all the injuries he had. Oddly enough he hasn't done anything this year... (I can't stand Gary Bettman!!!)

As a side note, in college I did a 25 minute presentation for a class on why the NHL lost that season. I can't believe they are dumb enough to repeat that history.

And THANKS MOM!!! for buying me a brand new scanner!
Posted by Brad's Blog at 8:59 PM