I recently went a little spending spree on ebay but I got some real cool stuff to add to my Phillies Collection! I already shared my Mike Schmidt rainbow from Five Star but this card is just the icing on the proverbial yummy chocolate seven layer cake (had one of those on Saturday night: one word, awesome). Without further ado the loot! 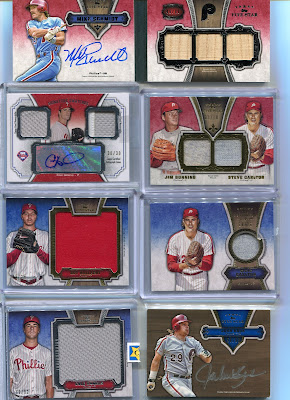 The Schmidt card is numbered 49/49 (EBAY ONE OF ONE WOOO). It's pretty sweet just need a good way to display it without destroying it. The Cole Hamels is my first auto of his and numbered 30/30 (ANOTHER EBAY ONE OF ONE!) from this years Museum Collection. I never bought any of these products but I do like picking the singles off. (not sure if that sentence made sense I just worked 14 hours or so). The Carlton and Kruk and Hamels relic you may have seen before.. well thats cause I bought one more of each just cause I liked them so much the first time. The Halladay relic is the fancy gold version numbered out of 25, it is a big red swatch which is nice.

The gem of the bunch (besides the Schmidt of course) is the dual patch Steve Carlton/Jim Bunning relic numbered out of 10. I went hard after this one cause I don't believe I've ever seen a Jim Bunning relic. It is a great addition to my collection and a really well put together card. Literally just search "Jim Bunning relic" on ebay and got one hit. If I see another pop up I'll probably throw a few bids at it and see what happens!